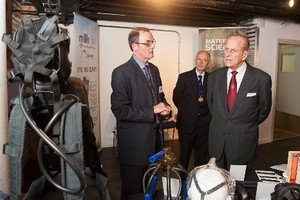 ARTIS Chief Scientist Martyn Bennett was nominated by Avon Rubber Chief Executive Peter Slabbert to collect the Prince Philip Award, at a presentation event held at the Institute of Materials, Minerals and Mining.

Avon Rubber was presented with the Award on the 10th November 2015 at the new IOM3 Euston Road premises in London. The award, presented to Avon by HRH the Duke of Edinburgh himself, is awarded every two years to organisations or individuals who have developed ‘polymers in the service of mankind’. Avon Rubber was selected for this year’s award largely for its 100 years of respiratory protection development. Avon Rubber has always strived to produce the best possible materials and products made from rubber and has been producing rubber gas masks since shortly after the introduction of chemical warfare agents in the First World War. Avon’s masks are recognised as world-leading by the people who use them, and by their very nature, are zero failure. They were used in the Second World War and today are used by more than two million people around the world.

IOM3 is a major UK membership organisation which exists to promote and develop all aspects of materials science, engineering and associated technologies as a leading authority in the worldwide materials, minerals and mining community.

Dr Bernie Rickinson, Chief Executive of IOM3, said, “It is apt that on the centenary of the war, a company that produces a major product borne out of that conflict is recognised for the contribution it has made to the protection of mankind.”

Martyn Bennett, who received the award on behalf of Avon Rubber, commented, "it is a real achievement for Avon to be recognised by the Prince and the Institute for its contribution to society and to see the award go to a wholly UK owned company. Personally, it is an honour to be allowed to collect it on the company’s behalf from the Duke himself"